Australian retailers have experienced more ups and downs in the last two years than any thrill ride on the Gold Coast. Record highs and crippling lows line up side by side from one month to the next, creating a highly unpredictable market. 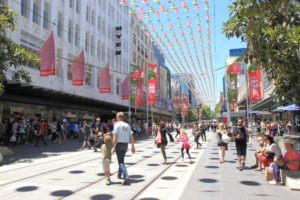 The end of 2021 was no different. In fact, it showed some of the most dramatic contrasts to come out of the pandemic so far. Retailers in this country are facing a turbulent future that is evidently tied to public health concerns and confidence.

2021’s penultimate month was a storming success for Australian retailers. According to the ABS (the Australian Bureau of Statistics), the total sales income for the retail market in the month of November was $33.4 billion- a record high in recent times.

The figure represents a jump of 7.9% month on month (from October 2021) and an increase of 5.8% compared to November 2020. An increase was expected, but the final total surpasses all predictions, which were set around 3.9%.

Reasons for the tremendous success during this month relate to the lockdowns. After months of on and off difficult lockdowns resulting from COVID-19 Delta outbreaks country-wide, the re-emerging population flooded to the high street to spend their savings, enjoy their freedom, and get a head-start on Christmas shopping while they still could.

Black Friday sales also launched during the month, which encouraged people to get out and get spending. Because of severe stocking issues and delivery delays in December 2020- another post-lockdown retail splurge- many people were keen to beat the rush and buy in November instead.

It was always expected that December was likely to face a drop. Each year, the Black Friday and Cyber Monday sales grow more popular, dragging a lot of the end of year spending into November. Again, because of the issues people faced in December 2020, all predictions pointed to some slowdown in 2021, respectively.

What was not included in the predicted figures was the sudden and dramatic rise of the Omicron Variant, which has rapidly and aggressively torn through the country and much of the world. Hasty lockdowns, self-imposed quarantines, and a whole new set of social distancing regulations brought the retail industry to a grinding halt.

New challenges arose that had a hard impact on the industry, as a whole, including serious gaps in the country’s supply chains. Because of the unprecedented rate at which the new variant has spread in Australia (more than 100,000 cases a day at its peak), isolation rules are heightened and stricter than ever.

Between social distancing and the sheer lack of people who are free to work rather than stuck in quarantine, December saw the return of empty shelves and an air of dismay.

According to reports from ANZ bank, the bank card spending from their customers in Australia (which accounts for almost a quarter of the population) is as low as it has been since before the Delta variant outbreak. Sydney and Melbourne were the worst affected cities in the nation. This does not bode well for retailers moving forward as long as the spread of Omicron continues its reign of terror.

The beginning of 2022 so far has not only shown a drop in sales but also in public confidence in the economy as a whole. On the bright side, most of the public are now confident in their own financial stability- far more than they were after the initial lockdown phase.

Overall, the turbulent ups and downs of the retail sector in Australia over the last few months tells us this: the country still wants to buy, and the money is there, but people are wary and reluctant to open stores and have people at work.

At least the performance in November gives us confidence that retailers can expect a strong rebound when the spreading inevitably slows and the general confidence in health and safety returns.

In the meantime, retailers must bunker down and ride out the storm. Short-term survival is the name of the game for now until the market evens out and the future becomes a little clearer.